The Parts of a Brisket: A Comprehensive Guide For 2023

There’s nothing like a good barbecue. And nothing quite says barbecue like a juicy, tender brisket. Brisket is one of the most popular meats for barbecuing, and there are good reasons for that.

It’s flavorful, versatile, and relatively inexpensive. But if you’ve never cooked beef brisket before, the prospect can be a little daunting.

What parts of a brisket are involved? How do you prepare it? What’s the best way to cook it?

Fear not! Our comprehensive guide will answer all your questions and help you make the perfect brisket every time.

What Part Of The Cow Is Brisket?

Briskets are cut off from a cows’ chest and contain the superficial and deep pectorals. This cut contains lots of fat and connective tissue that contribute to its beefy taste. Untrimmed briskets can be sold as whole beef brisket, although butchers sometimes split them into 2 segments: point and flat.

Point vs Flat: Understanding the Differences

Whole beef brisket has two basic cuts called points and flats. The point is the fattier and more marbled section, while the flat is leaner.

The point is also known as the deckle because it’s attached to the cow’s rib cage. It has a thick layer of fat on one side with a great deal of marbling throughout. Image From The Mountain Kitchen

The brisket flat cut also called the first cut or the thick-cut, is a long, wide, and relatively leaner section of meat. It’s attached to the cow’s breastbone and has very little fat compared to the point.

Flat cuts are usually sold as individual steaks or roasts. They can be tough if not cooked properly but are much more forgiving than the point cut. The flat cut is best grilled, roasted, or smoked.

The meat from the brisket flat is also perfect for making your own corned beef.

As we mentioned, the brisket point cut is attached to the cow’s rib cage. It has a thick layer of fat on one side with a great deal of marbling throughout.

Flat cuts are usually sold as individual steaks or roasts. They can be tough if not cooked properly but are much more forgiving than the point cut.

When it comes to cooking, the point and flat cut have different ideal cooking methods. The point is best suited for braising or smoking because of its higher fat content.

The deckle is the fattiest, most marbled part of the brisket. It’s located on the point cut and is attached to the cow’s rib cage.

It has a thick layer of fat on one side with a great deal of marbling throughout. This makes it ideal for braising or smoking because the fat will help keep the meat moist and juicy.

The deckle is also known as the point cut because it’s attached to the cow’s rib cage.

The fat cap is a thick fat layer that covers the entire brisket. It’s located on the top of the meat and helps protect it from drying out during cooking.

The fat cap also adds flavor and moistness to the whole brisket. It should be left intact when cooking, as it will render down and help keep the meat moist.

Some butchers remove the fat cap before selling the brisket, so be sure to ask if you’re not sure.

Separating The Point And The Flat

Separating the flat and point is the first step in preparing an untrimmed brisket for cooking. The easiest way to do this is with a sharp knife.

Start by trimming off any excess fat covering from the surface of the meat. Then, locate the seam that runs between the two cuts of meat.

Insert your knife into the seam and slice through the meat until you reach the bone. Then, use your knife to follow the contour of the bone and separate the two cuts of meat.

Once the flat and point are separated, you can begin trimming off any additional fat or silver skin. Silverskin is a layer of fat and connective tissue that covers the surface of the meat.

It’s not necessary to remove all of the silver skin, but you should remove enough to ensure that the seasoning can penetrate the meat.

Now that you know all about the parts of a whole brisket and how to prepare it, you’re ready to start cooking!

How To Prepare A Brisket For Cooking

Before you start to season your beef brisket, shave the fat cap down to about an eighth of an inch with a very sharp knife. You can remove more or less depending on how you like your brisket. Just remember that the fat helps keep the meat moist, so don’t overdo it.

After you’ve trimmed the fat, it’s time to start seasoning. The best way to do this is to use a dry rub. A dry rub is a mixture of spices that are rubbed into the surface of the meat.

There are many different recipes for dry rubs, so feel free to experiment until you find one that you like. Once you’ve applied the rub, wrap the brisket in plastic wrap and refrigerate it overnight.

This will give the spices time to penetrate the meat and impart their flavor.

Now that your beef brisket is prepared, it’s time to start cooking. As we mentioned earlier, the point and flat are best cooked using different methods.

The point is best suited for braising or smoking because of its extra fat content. Braising is a cooking method that involves browning the meat in a pan, then cooking it in liquid until it’s tender.

Smoked brisket is another great option for cooking the point. Smoking imparts a rich flavor to the meat and helps to tenderize it.

The flat, on the other hand, is best grilled, roasted, or smoked. Grilling and smoking will give the meat a nice flavor, but roasting is the best way to ensure that brisket remains juicy and tender.

The meat will lose nearly one-third of its weight during the cooking process. This means that it’s important not to overcook your roast or else you might end up with tough and dry pieces!

No matter which method you choose, be sure to cook the meat until it’s fork-tender. This will ensure that your brisket is juicy and delicious.

Now that you know all about the parts of beef brisket and how to prepare it, you’re ready to start cooking! With a little time and patience, you’ll be able to create a delicious, juicy brisket that your family and friends will love.

Don’t Forget To Rest Your Brisket

Once your whole packer brisket is cooked, it’s important to let your brisket rest before slicing into it. This will allow the juices to redistribute throughout the meat, making it even more flavorful and tender.

Simply place the whole beef brisket on a cutting board or platter and wrap your brisket with foil. Let it rest for at least 30 minutes, but up to two hours if you have the time.

Then, when it’s ready, slice it against the grain and enjoy! 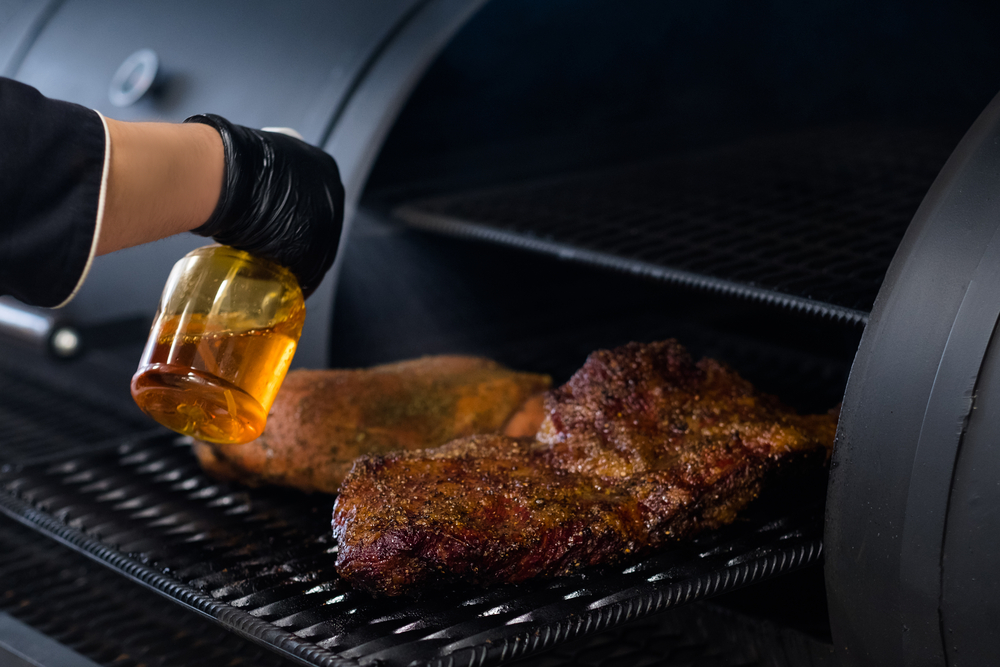 What are the parts of a brisket?

There are a few different muscles in a brisket. The most well-known is the flat cut, which is the large, thin muscle on the lower half of the brisket. It’s called the flat because it’s relatively flat compared to other muscles in the cow.

Then there’s the point cut, which is located on the upper part of the brisket and is more marbled with fat. Finally, there’s also a small muscle that runs along the bottom of the brisket called the deckle.

The flat and point are usually what people mean when they say “brisket”. The deckle can be tough and stringy, so it’s not as popular among pitmasters and barbecue enthusiasts.

What is the better part of the brisket?

This question has no definitive answer since it largely depends on personal preference. Some people prefer the fat-marbled part of the beef brisket, while others prefer the leaner meat.

However, the consensus seems to be that both parts are equally good. In fact, some people even argue that the fatty part is better because it has more flavor. At the end of the day, it’s up to you to decide which part you like better.

So, there you have it – everything you ever wanted to know about brisket (and then some). We hope this comprehensive guide has been helpful and that you will give the brisket a try in your own kitchen.

It’s not an easy meat to cook, but the results are well worth the effort.

When to Wrap Pork Butt: Expert Tips for the Perfect...

Traeger Smoked Salmon: How to Smoke Salmon Like a Pro

7 Picks for Best Wood for Smoking Brisket (Any Skill...